Conferences may be a one-day event, or last two or three days. When you include pre-conference workshops, which are common in some fields, conferences may even cover 5 full days. Sounds tiring? It is, in a way. Still, conferences are actually quite useful (as described by Anouk van Leeuwen in ” Is participating in academic conferences worth the time and money?“). That is, if you do not drown in the overwhelming amount of sessions, lunches, dinners, drinks and/or other social events. The question is: how? How not to drown at conferences? The simple answer: chose your sessions wisely ahead of the conference’ start.

Obviously, I have learned this the hard way myself. As a fourth year PhD student, I have attended quite some conferences. Fanatically attending every single round of sessions, I oftentimes found my attention slowly but steadily decreasing, sometimes already on the first day. Yet, this would generally not hamper me to continue in the same vein the next conference day(s). The consequence: when someone would ask me which sessions I had attended, I generally had difficulty remembering their content. Of course, I nonetheless also did learn from those sessions. However, I always needed the notes that I had made during the sessions to remember what I learned and liked exactly.

During my most recent conference visit, I decided to go about it differently. After two days of pre-conference workshops, I attended only one (to be honest, actually only half a) paper session on the third day. After that, I went for a run. Why? First of all, because I felt like it. Second, because the weather was way too good to stay inside. Third, because I was in the beautiful city of Vancouver, which is surrounded by water, ‘beaches’ and mountains, and because I was staying close to the marvelous Stanley park. From all of this, I basically had seen nothing yet. My run came with some spectacular views indeed (see below)! Fourth, and most importantly, I went for a run because there were no sessions in the program that afternoon that were of much interest to me. So why stay?

I know why you might stay, and will tell you why do not have to. To start, you may be afraid to miss out on a session that potentially could turn out to be of interest to your research after all. I know I was. However, I learned that sessions that did not grapple my intention in the program in the first place, never turned out to be interesting; on the contrary. You may also feel you have to stay because your university, graduate school, or may be even your own supervisor is paying for your visit to the conference. No worries, they will not be angry or, worse, disappointed if you wisely decide to take some time off to relax and re-energize so you can gain more from the sessions to come. If you are afraid to be caught skipping sessions by your supervisor, remember that when your supervisor finds you not attending a session, s/he is not attending either. More importantly, your supervisor has better things to do than checking on you, like enjoying the city themselves. (Make sure, though, that they come and attend the session in which you present your work!) 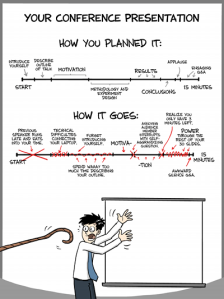 Yes, I had come prepared this time: before flying to the other side of the world, I had ploughed the program and made a selection of sessions that appealed to me. You can do the latter, for example, based on the (famous) people who will be presenting. If available, you could also have a quick reading of the papers that are presented. This will help you make informed choices, and also increase your involvement in the discussions during the sessions. Given that conference presentations generally only last 10-15 minutes there is only so much presenters can tell, and you oftentimes end up with only a hint of what a paper is actually about.

When you read the paper in advance, or have a look at previous work of the presenter, you are able to (publicly!) give intelligent comments or ask questions, which is always good at conferences, or so they say. Moreover, it will help you to get in touch with the presenters afterwards. 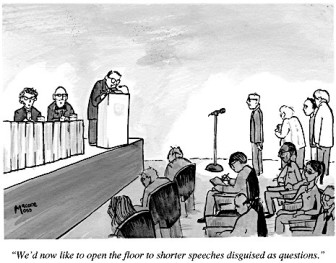 So, instead of attending each and every session, my humble advice is to skip some, to choose your sessions wisely, prepare for those sessions, and join the discussions. To be honest, I have not actually joined in many plenary discussions at previous conferences. However, I will definitely (try again) next time… I will keep you posted!

Marieke van Wieringen is a PhD candidate at the department of Organization Science. Her research focuses on how actors within home care organizations perceive and act upon different institutional demands in their day-to-day work.

3 thoughts on “How not to drown at conferences: go out and run!”